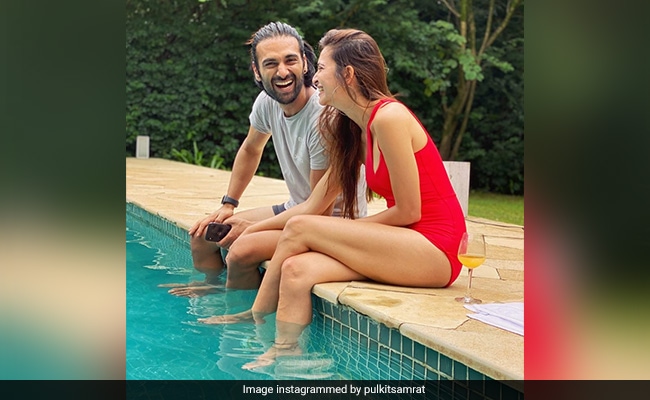 We just can’t seem to get enough of Pulkit Samrat and Kriti Kharbanda’s social media PDA. The couple, who have been staying together since the imposition of nationwide lockdown earlier this year, frequently share pictures from their time together. Wednesday morning, for them, was all about pool time. Sharing a picture of himself and Kriti, chilling by the pool, Pulkit Samrat captioned the post: “Aaj blue hai paani, paani.” He was referring to the song Sunny Sunny from the 2014 film Yaariyan. In the picture, Pulkit can be seen wearing a grey t-shirt and shorts, while Kriti Kharbanda looks stunning in a red swimsuit.

Check out the picture shared by Pulkit here:

Last week, Pulkit shared glimpse of his camping trip with girlfriend. “Camping is fun when the company is Kriti Kharbanda,” read the caption on his post. Take a look at the post:

Earlier this month, the couple posted a picture from their long drive, where they were accompanied by their pet husky dog Drogo. “Long drives are love,” Pulkit Samrat wrote in his caption.

The actors will also work together in Bejoy Nambiar’s Taish. Kriti Kharbanda has featured in films such as Housefull 4 and Pagalpanti. She will next be seen in the Tamil film Vaan. Pulkit Samrat will next be seen in Haathi Mere Saathi, which stars Baahubali actor Rana Daggubati in the lead role.